Persecuted to the point of deemed extinction in the UK in 1916s, Ospreys have made a big come-back to over 300 pairs in Scotland since 1954,
but there are still just 4 breeding pairs in Wales.

Ospreys fell foul to persecution and predation in the 1800s with the increase in game keeping, shooting and egg collecting. They were also effected by chemical and pesticides like DDT in the 1950s, banned in 1980s. However real threats still exist, one being the risk of collision with and electrocution by power lines and poles. 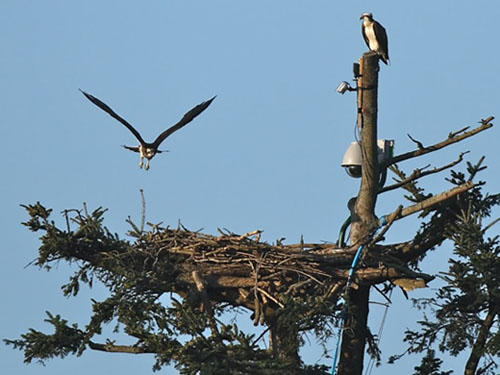 The first known breeding pairs were in 2004, one in the Glaslyn valley and one near Welshpool.
The Glaslyn pair tragically lost their 2 young chicks in a June strom where part of the nest blew out, where the 2 chicks fell to the ground and perished.

From those small beginnings population progress has been slow.
Success in the Welshpool nest did not repat itself, whereas the Glaslyn nest continued strong, now managed by Bwllch Gwyllt Glaslyn Wildlife.
Yet it wasn't till 2011 that a second breedling pair established itself at Cors Dyfi south of Machynlleth, managed by The Dyfi Osprey Project.

In the meantime since 2005 a Glaslyn based conservation volunteer group 'Friends of the Ospreys' were enthusiastically putting up artificial Osprey nests in suitable habitat locations under the directive of Roy Dennis the Osprey repopulation expert from Scotland. (It was Roy Dennis in partnership with Tim Mackrill who engineered and carried out the translocation programme of Scottish pre-fledgling Ospreys to Rutland Water, Egleton, UK, which successfully gave the foundations of what has now grown to be 11 breeding Osprey pairs, now celebrating 20 years of The Rutland Osprey Project

Due to the efforts of Friends of the Ospreys a third pair took up residence in 2012 on a nest on private land in the Snowdonia zone, successfully raising one chick. In addition several single Ospreys were growingly visiting and spending time on a number of these artificial nests.
A further pair finally formed in mid Wales in 2013 making the fourth of the existing breeding pairs, though a new male has ousted the previous male.

In 2015 those Ospreys were known as Aran + Mrs G on the Glaslyn and Monty and Glesni on the Dyfi.
We still also have one other pair in Snowdonia and one in Mid-Wales. 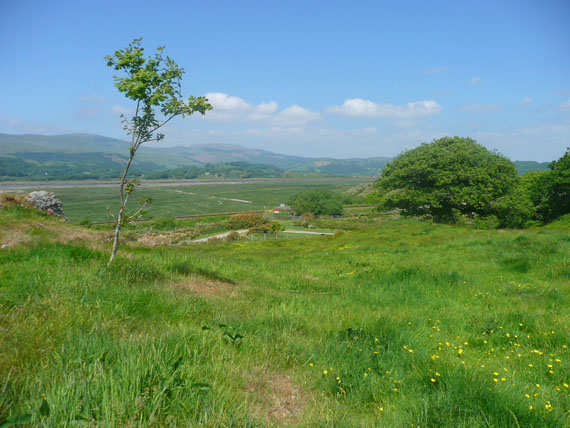 The beautiful Dyfi valley, home to one and then more Dyfi Ospreys since 2008

Several more young single birds resided or visited in the Glaslyn + Dyfi valleys in 2015.
We have lost one male CU2 Jimmy but fingers crossed for Blues 5F, 3J + 24 and 80 next year.
New nests put up by Friends of the Ospreys are awaiting you! 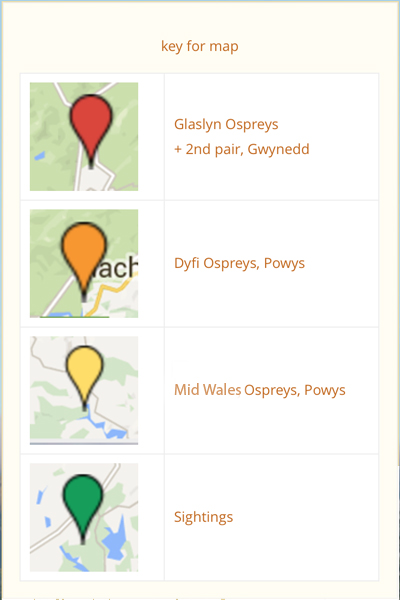